Home » Jody’s Banjo Blog » What is the 5th string on a banjo for?

What is the 5th string on a banjo for?

I get asked this question a lot on live streams, so I thought I’d cover it in today’s blog post.  First and foremost, understand that not all banjos are five string banjos.  There are also four and six string banjos.  Neither of those banjos have the short 5th string sticking out of the neck.  Banjos played in the Bluegrass style ALL have this unique 5th string; it’s partly what allows one to do the traditional banjo rolls you hear.  Four string banjos are primarily played with a flatpick or strummed.

Contents of Article (for easy navigation)

5th string on a banjo – What does it do?

The 5th string on the banjo is referred to as a Drone.  This drone string provides resonance and harmony to the other notes played.

Think of music as possessing LAYERS. If you only have a melody (kind of like you would sing it by yourself), you have one LAYER. This can be interesting but gets old after awhile. In addition, imagine someone playing piano with only one finger, only plucking out the single-note melody.

You can think of the 5th string on a banjo as an additional second layer.  It’s kind of like someone else singing a note underneath (or above) the melody.  Except, they are singing the same note the whole time.   Even though this same note is droned over and over, it isn’t played on every beat (that would get old fast!).

We know the banjo came to America through the slave trade.  From Africa, to the Caribbean, and into Louisiana.  A lot of people mistakenly believe that it the 5th string was invented here in America.  However, going back into history, looking at paintings, and diving into readings, one finds that it was the FOURTH string that was added to the banjo here in America.  In summary, the banjo already had this little drone string before it came to America.  Here is an ancestor of the banjo called the Akonting if you’d like to see more.

Special considerations about the 5th string:

You must take into consideration whether or not the 5th string note is harmonious and goes with the other notes played.  Often, this 5th string open doesn’t go with the chord you are playing.

For example, an E major chord contains the notes

The open 5th string (G) collides with the G# in the E major chord if they are played close to one another.  So if you want to play in the key of E, you probably don’t want to hit the drone string open (G).

Yes, the easiest way of solving this is to not hit the fifth string while you play certain chords (E and B major are good examples).  However, this is super limiting in many cases and there are better solutions.

In order to solve this problem so we can continue doing our normal rolls, one has to CAPO the fifth string.

How do you capo the 5th string on a banjo?

Here are some solutions:

1)Banjo Ben has this neat 5th string capo on his store for just under $15.  It sure beats the ones on Amazon that are ALMOST the same things for FIFTY BUCKS!!!

2)The 2nd and most used solution by professionals is railroad spikes installed in the banjo fingerboard. The only issue here is most banjos don’t come with these installed and you’ll need a luthier to do it for you. You can then slide the 5th string under the spike; thereby, capoing the string.

Please understand, you DO NOT need fifth string spikes at every fret as shown in this picture. You really only need them at the 7th, 9th, and 10th frets.  Some people put one at the 8th fret as well (for Bb).  My banjo doesn’t have one at the 10th fret as I never capo up to the key of C (I play out of open)

With any of these 5th string capo solutions above, you can capo the fifth string so it fits the key.  In the key of E (from earlier), we normally capo it up to a B note.

Can you fret the 5th string on the banjo?

It turns out that the fifth string is not always used as a drone.  Sometimes, in the intermediate and advanced repertoires, the fifth string is fretted.  Here is a link to a video I did on Thumb Chords that shows this technique.  Players like Bela Fleck and Noam Pikelny use this a ton.

Click on the image to play the video in the lightbox 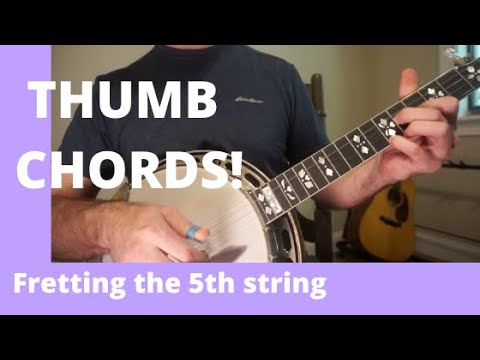 A design you MIGHT see once you seriously get into banjos is the Tunneled 5th string.  Look at the image below.  This example comes from Vance Banjos, who makes some incredible banjos.

You’ll notice that there isn’t a 5th string peg sticking out.  That is because the fifth string is run underneath the fingerboard and back out at the top of the headstock (The headstock has five tuning pegs as opposed to the normal four).  The first person I saw use a banjo like this is Scott Vestal, he has his own banjo called The Phantom.

So, there you have it, more than you probably ever wanted to know about the fifth string of a banjo.  That short guy serves a big purpose with banjo picking.  It serves as a drone, it allows us to add different colors to our up -the-neck chords and more.  In short, the string is there to add another dimension and layer to our music.

Please consider subscribing to my MUSIC JOURNEY NEWSLETTER BELOW: